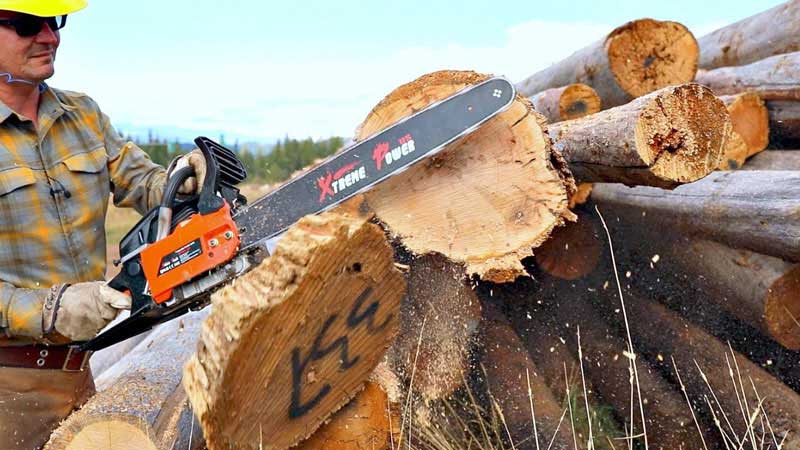 Chainsaws are some of the most useful power tools. Mainly used for felling trees, cutting down smaller branches of trees (limbing), pruning, and bucking (cutting logs out of a felled and limbed tree), these automated saws save us hours of hard labor due to the sheer power they operate on.

However, as with any machinery that makes our lives easier, we may wonder as to how exactly this machine works. What makes it so powerful and efficient?

Often, knowing how a machine works makes it easier for us to trust it and start using it. Being intimidated by technological advances is not uncommon, and certainly, nothing to be ashamed of.

All that said, this article will help you understand the mechanics of a typical chainsaw.

What Exactly Is a Chainsaw?

In simple terms, a chainsaw is an electric handheld saw. Instead of a long blade with sharp teeth, a chainsaw has numerous teeth connected to a chain that rotates and runs along a guide bar. You should use a chain sharpener to keep the chain in optimum condition.

Usually used for cutting various parts of trees, chainsaws can also be used to cut ice since the invention. Additionally, there are specialized chainsaws for cutting concrete. This versatility of their functions is, of course, owing to their power.

Let us look more in detail into exactly where chainsaws get their immense power from, and what else goes on inside this handy machine.

Different Parts of a Chainsaw

As mentioned before, a chainsaw’s “saw” is basically a chain with about 30 sharp teeth running continuously along a guide bar. Now, let us go beyond that and inside the actual component, and explore the functions of the different parts within it.

Chainsaws typically run on either an internal gasoline combustion engine, or battery, and sometimes electric motor. The combustion engine can come with a traditional or electronically adjustable carburetor (a device inside the engine which mixes air and fine sprays of liquid fuel i.e., petrol or gasoline in the case of chainsaws).

This is a device that controls the intake of fuel into the chainsaw’s engine. The supply of clean air to the carburetor is ensured through fine and less fine meshes.

Depending on the level of altitude the chainsaw is being used, the fuel oil-to-gasoline ratios will need to be adjusted on a traditional carburetor. However, these adjustments take place automatically in electronic carburetors. To know in detail about the carburetor adjustment, read this article. 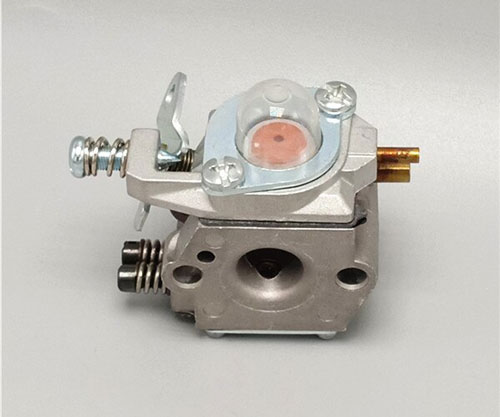 Some chainsaws also come with winter or summer modes, so that using the winter mode (wherein a hole in the cover is opened), warm air can be passed onto the air filter and carburetor to stop the icing. The hole remains closed during warmer weather conditions. Learn how to clean chainsaw carburetor here!

As with vehicles, the muffler on a chainsaw reduces noise.

Usually, a plastic or metal guard, the chain catcher prevents the chain from striking the operator in the event of it breaking or being derailed.

A part of the chain sprocket, the clutch controls the speed at which the user cuts something with the chainsaw.

This can be thought of as a trigger, which, when pressed, supplies fuel to the chainsaw’s cylinder and controls the saw’s revolutions per minute (RPM).

The choke valve on a chainsaw controls air pressure and fuel intake when starting up the saw.

This component controls the speed of the chainsaw and also keeps it from overheating.

The purpose of this component is to ignite the fuel in the chainsaw’s engine. It will wear out over time and require replacement.

This prevents burning carbon deposits from exiting the chainsaw and potentially starting a fire.

How Does It work?

The magic happens in and around a cylinder within the cover of a chainsaw.

The engine starts as the ignition switch is turned on. As the starter rope is pulled, the starter engages the drive cup on the flywheel, and that rotates the crankshaft. The rotating crankshaft connects to the piston, which moves continuously within the cylinder, and begins the ignition process.

When the piston gets to the higher part of the cylinder, you’ll see that the spark plug starts the compressed fuel and air mixture, which makes the piston back down, exposing an exhaust port through which the used fuel exits.

Within less than a second’s time, the intake port is exposed again. Fresh fuel is drawn in, and the process is repeated with every revolution of the crankshaft.

If the spark arrestor is clogged, then the chainsaw may start but will stop sometime after. A clogged arrestor stops exhaust from exiting the engine. Make sure to use the proper amount of the right type of oil to prevent this.

A defective spark plug or a restricted carburetor can also cause the engine to not start at all. Carburetors can be cleaned, but might also need replacement.

Though very powerful, the chainsaw is also quite a safe power tool. In addition to the chain brake, you can also attach a cover at the end of the saw to prevent it from injuring anyone opposite to you while you are operating the chainsaw. Also, check our electric chainsaw reviews to find a good pick, or know where you can rent a chainsaw in the US.

The mechanism of the chainsaw itself is quite simple, but it is important for you to know the above information for your own safety and for the lengthy life of your chainsaw. Learn how to use a chainsaw here!