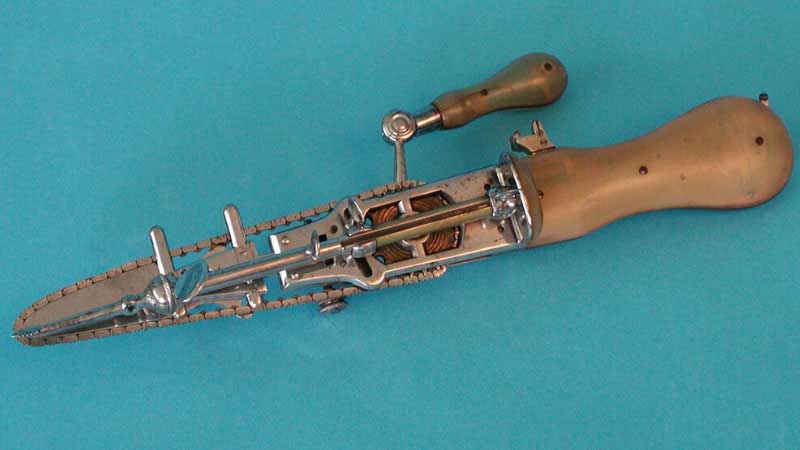 A chainsaw is a practical tool everyone is familiar with. Do you want to chop up some firewood? Or fell a tree down? Your solution is the chainsaw. From taking care of your yard to clearing up any place after a storm, a chainsaw is your best buddy.

There are many different types of chainsaws, all of which come in handy, depending on the type of task you perform. But have you ever wondered when the first chainsaw was invented? What did it look like? Apparently, the first few chainsaw models weren’t as sophisticated as they are now.

To feed your curiosity, this article will cover the history of the chainsaw. Read along to learn about when the first chainsaw was invented and how it came all the way through.

Where Can I Rent a Chainsaw in the US?

The Ancestor – First of Its Kind

The image that comes to our mind when we think of a chainsaw is a battery-, electricity- or gas-powered saw that, attached with a chain around, keeps spinning and cuts down what it goes through.

Well, the first-ever saw was nothing like this. It wasn’t even intended for woodcutting! The precursor to today’s chainsaw was invented for rather some very different purpose. The first-ever chainsaw, called “osteotome”, was invented by Bernhard Heine, a German orthopedist, for medical purposes.

This device was invented with the purpose of cutting through human bones. The incident dates back to the 1830s. For then, it was a revolutionary invention that brought massive change to the surgical procedures of cutting bones. The device had a long blade guided by a chain with sharp teeth.

Surgeons could hold it in their own hands and operate it by turning the handle of a sprocket wheel. The osteotome could cut through bones much more efficiently than other tools such as hammers and chisels.

And the invention of osteotome led to surgeons having easier jobs in performing medical surgeries like craniotomies. The osteotome was lightweight, and it was easy to be held by one person.

Although the work of this device stood nowhere near what chainsaws do nowadays, it is perceived that osteotome was the first-ever chainsaw-like tool. The invention of a woodcutting chainsaw occurred much later from that era.

The development of a modern chainsaw took a long time and was preceded by inventions of a lot of other such woodcutting devices. A specialized hand-cranked chainsaw called Hamilton Saw was invented in 1861. This chainsaw was giant in size, and it could be operated by two men.

It was totally human-powered and quite hard to operate. Then, around the 1880s, another saw called American Riding Saw appeared on the scene. This saw was also human-powered, and it looked similar to a rowing boat on which a person would sit and operate.

And this riding saw could hardly be called a chainsaw for its shape and structure. According to some reports, a naturalist and inventor named John Muir came up with the idea to adopt the osteotome to a larger machine that would be used for woodcutting.

However, the machine invented by Muir was too heavy in weight – hundreds of pounds – that it couldn’t be a commercial success.

Again in 1905, another new effort called the “endless chain saw” had its patent granted to an American named Samuel J. Bens. This model was more like a chainsaw; however, the device was still bulky and hard to make use of. Its impractical design led it to become obsolete.

All these inventions did not succeed in the long run as they lacked in one prospect or another. Also, a machine like such had to have high mobility in order to be effective. But these earlier devices definitely contributed to the later inventions of modern chainsaws.

The appearance of a modern chainsaw occurred much later, reportedly in 1926, when German engineer Andreas Stihl came up with the first-ever electric chainsaw for logging purposes. This was patented to be the very first motorized chainsaw after years of using human-powered saws.

Later in 1929, Andreas Stihl also developed another version of the chainsaw, which was rather powered by gas. In the meantime, another company led by Emil Lerp, had already started producing gas-powered chainsaws. 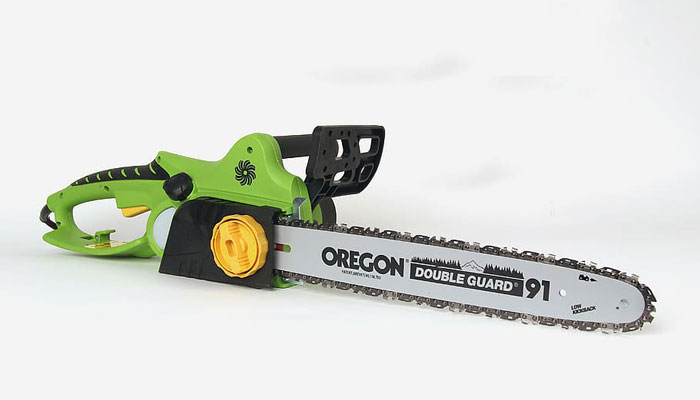 So, it can be assumed that several companies started to work on producing motorized chainsaws and making them more effective. These new inventions played a vital part in revolutionizing the logging industries. The motorized chainsaws became portable, and it could be massively used.

After World War II, more improvements made their way to chainsaws to a point where the machines could be carried and operated by a single person. It was still heavy for carrying for many people. In between the ‘50s and ‘70s, a lot of improvements were made on chainsaw designs.

Antivibration systems were installed so that the machines could be held for a longer period. Low profile chains started to be developed by different companies to reduce the weight and make it more portable. The Oregon company introduced many newer inventions like thin blade tips, which increased efficiency to a higher level.

Chainsaws have by now come a long way after its first invention in the 1800s. And today, it is continuous development. Every time you check on in the market, you find more and more special features in the devices.

There is a wide variety of chainsaws, many of them run by gas, battery, etc. The best electric chainsaw types can be found for different purposes, in different sizes. You can even have different lengths of guide bars, according to your needs. These chainsaws are not even loud.

The chainsaws today are so effective that it’s reduced your effort and boosted the efficiency.